The Power of Dependence 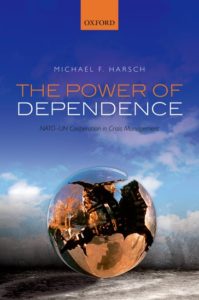 Since the end of the Cold War, crises from the Balkans to Central Asia and Africa have forced international organizations to adapt, expand, and cooperate to end civil wars, manage humanitarian challenges, and contain terrorist threats. The Power of Dependence explores the complex relationship between two of these organizations: NATO and the United Nations. It advances an innovative resource dependence approach to explain the stark variation in interorganizational cooperation, combining insights from international relations theory and organizational science in a comprehensive theoretical framework. Comparing NATO and the UN’s engagement in three major post-Cold War conflicts—Bosnia, Kosovo, and Afghanistan—the study finds that the level and balance of the organizations’ resource dependence plays a crucial role in shaping the degree of cooperation.

The Power of Dependence demonstrates the logic, dynamics, and impact of organizational interactions in addressing regional instability and violent conflict. It will be of interest to anyone concerned with understanding and building more effective interorganizational partnerships in crisis management.

“Harsch’s book is a timely and unique resource which helps bridge the gap between IR theory and organizational science. It is also a blueprint for how researchers can help effect actual political change.”

“NATO and the United Nations will again go to war together in the future. Before launching the next operation, Michael Harsch’s well-researched book should be read by every diplomat, development specialist, and soldier assigned to the mission. It suggests key principles for cooperation and identifies conditions that seem to limit collaboration. I wish I had Michael’s book both when I served as a military commander and as an ambassador in Afghanistan–we would have done better.”

“Michael Harsch has written a book which is both instantly readable as well as breaking very new ground. He describes with great clarity the complex, often difficult but always important relationships between the United Nations and NATO. His analysis of the basic drivers of those relationships allows us for the first time to think carefully how we might improve them in the future. This is a true example of the value of scholarly reflection to practice.”

Martin Griffiths, Director, European Institute of Peace; former Deputy Head of the UN Supervisory Mission in Syria and former UN Regional Humanitarian Coordinator in the Balkans; Founding Director of the Centre for Humanitarian Dialogue in Geneva

“The study of relationships among multilateral organizations is a research frontier in international relations and Michael Harsch is a pioneer. The Power of Dependence is a fascinating study of the conditions under which NATO and the UN cooperated, or failed to do so, on post-Cold War issues of crisis management.”

“An impressive book that should be widely read at the UN and at NATO. Constructed around a useful theoretical framework, it advances our understanding of what has often been a fraught relationship between these two important international organizations.”

“The proliferation of international institutions means that many problems in today’s world require cooperation not just among states but among multiple organizations with varying and sometimes overlapping missions, resources, and memberships. By examining the conditions that permit or hinder cooperation among international organizations, The Power of Dependence breaks new ground on this important topic.”